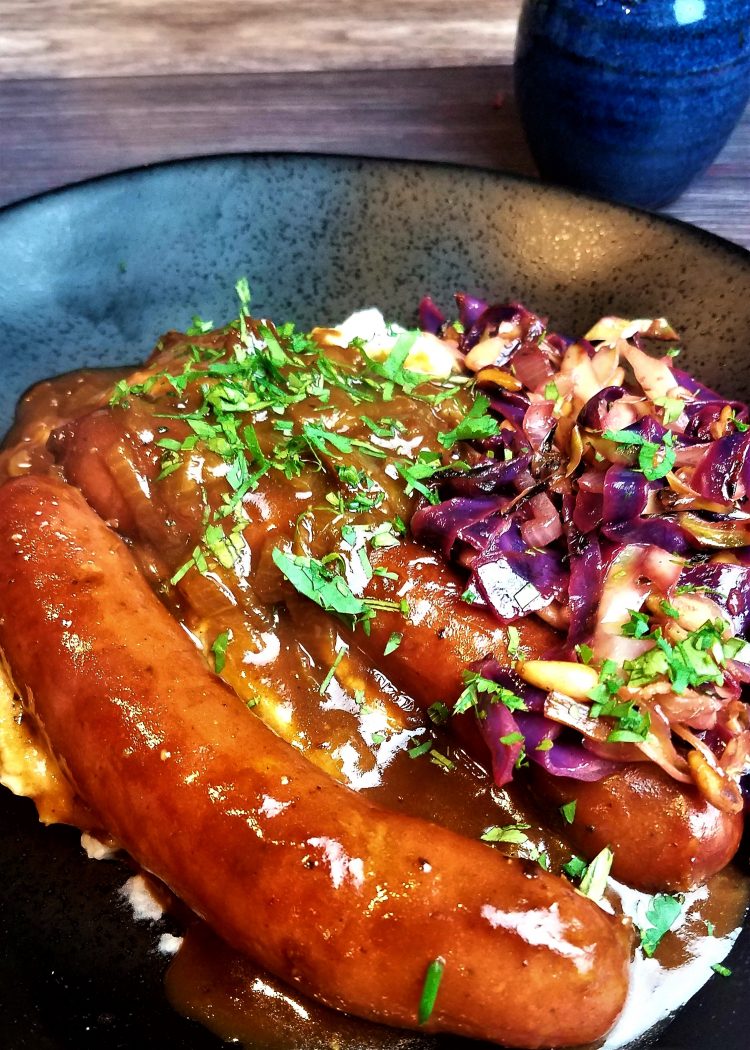 Good food makes every family celebration extra special. We all enjoy getting together and talking about food. For each holiday, we have our favorites and specialties that we like to make. Our contributions range from vegan to … not. The one thing they all have in common is their originality. We’re all looking forward to Saint Patrick’s Day. I’d like to share with your my twist on the traditional bangers and mash. It’s a Sausage with Caramelized Onion and Porter Gravy dinner.

English Bangers can be hard to find in my area, I’ve created a recipe that switches out the traditional bangers for a smoked sausage with white cheddar and caramelized onions. It’s a perfect combination of the banger flavor, the saltiness you would fine in Irish Cheddar and the caramelized onions in the gravy.

I prefer to use a Dutch oven to sear and simmer the sausages. It creates a nice crisp browning skin that adds more flavor to the dish. After the sausages have browned, add the Porter and allow the oven to deglaze.

Your gravy will be the most challenging part of the recipe. Start by caramelizing your onions using butter and a sliced yellow onion. Using yellow onions insures that our gravy won’t become overly sweet. Stir in the flour and allow the rue to simmer for 5 minutes.

Next, whisk in the Porter and allow the pan to deglaze briefly, making sure whisk the rue continually. You’re now ready to whisk in the beef broth. Allow the gravy to simmer over medium heat to thicken. Continue stirring and keeping a watchful eye on your gravy. You don’t want it to scorch. If your gravy is too thick, you can whisk in more beef broth in small amounts. Too thin? I just let the gravy continue to simmer down for a few more minutes.

There are two ways you can serve up your Sausage with Caramelized Onion and Porter Gravy. I like to combine the gravy and sausage in a the Dutch oven for ease of serving. This creates fewer dirty dishes an idea that my children are greatly fond of. To serve them separately, remove the lid from the Dutch oven and allow the porter to simmer off and coat the sausages. Either way, you going to love this.

With Saint Patrick’s Day is coming up soon, I’d like to share with your my twist on the traditional bangers and mash. It’s a Sausage with Caramelized Onion and Porter Gravy dinner. It’s a slight more savory version of the traditional meal, but well worth it.