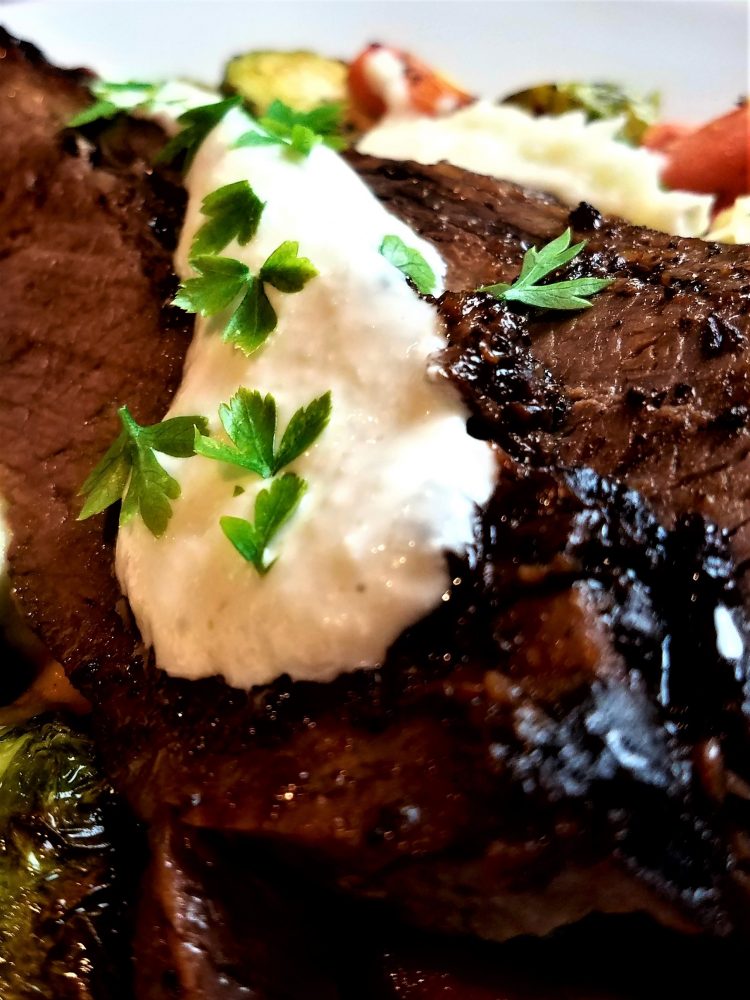 Here come the holidays! Time to bust out that dusty old holiday recipe binder filled with your tried and true favorite recipes. But hey, why not try something new? This year, try your hand at this Savory Plum Brisket. Over the years, I’ve collected some pretty great hacks in how to cook the most amazing brisket.

It all started at a Seder dinner for Passover, with my husband’s family in Chicago. His cousin’s wife, Andi, made the most mouth watering and tender brisket I had ever had. Since Chicago is a little too far to drive for brisket, I took it upon myself to learn how to prepare one. I started by asking Andi how on earth she was able to prepare the brisket so well – she gladly shared several of her secrets. Here are Andi’s types and a few of my tricks, as well.

Creating a flavorful sauce that accentuates the flavor of the meat without covering it up or drying it out can be tricky. Andi had it down perfectly. While I didn’t get her sauce, it put me on the trail to finding one. It took me years to discover the original version of this recipe. Right away I knew I’d found something that could be truly nummy. The original recipe calls for fresh plums. Unfortunately, you can’t find plums year round. So, I started substituting dried prunes. At first I added them in whole, but found they didn’t cook down enough to really combine with the sauce. Now I slice them up and dump them in. The additional spices like the five spice, ginger and garlic, needed to be bumped up quite a few notches. I’ve tripled the original measurements and couldn’t be happier.

Remember, a recipe isn’t carved in stone. Play with it. You can add things, remove things, and change the measurements. Cooking should be fun and complement your palette. Make what makes you happy.

Searing a roast before cooking adds a substantial amount of flavor to the meat. It also helps to seal in the juices and flavor. Searing the fat on a roast, such as a brisket, also helps to caramelize the fats and sweeten the roast Don’t be afraid of the heat when you are searing the meat. A high heat will sear the outside without cooking the inside.

The greatest suggestion I think I’ve ever received was from Andi. Cook the roast low and slow in a good sauce! Now I’ve used that approach with BBQ for years, but it wasn’t until Andi suggested it, that I tried it with a brisket. It was perfect! Dreamy! So set your ovens to 325 and not a smidge higher. After searing your roast, place it in a roasting pan with the fatty side facing up and top it with your sauce. Cover your roast so the moisture doesn’t evaporate off and leave it alone. That’s right. Don’t keep checking it. Just let your Savory Plum Brisket do it’s thing.

Here’s one I’ve learned all on my own. Your brisket is going to be incredibly tender and want to shred up on you while you cut it. Have no fear. It’s time to chill. Literally. Remove your brisket from the roasting pan and wrap it up tightly in foil. Make sure to set it in a baking dish in case some of the juices leak out. If you’re preparing your brisket a day ahead of time, you can put it in the refrigerator. However, if it’s for dinner that day, you’ll want to chill it in the freezer for 3 hours.

By wrapping it in foil, you are helping keep the juices in the Savory Plum Brisket, as it cools and constricts. The remaining fats in the juices will help to stabilize the meat as it cools. Once it has cooled completely, you ready to remove it from the fridge and start slicing. I love this trick because while I really enjoy a juice and tender brisket, I could never manage not to shred it when it came to cutting it. Problem solved.

You’ll may want a strainer for this next step. But, it really isn’t required. I like to strain the remaining sauce. You can make a gravy with it or just use it as an au jus for when you reheat the brisket. The best part is, after it has had 3 hours to chill, the fats have solidified on the surface and can be scrapped off. Why is this a good thing (and no, I’m not quoting Martha Stewart)? Because you can use those fats later, as you reheat the brisket.

Tip #6: Time to Reheat the Meat

Now that you’ve chilled and sliced your brisket, it’s time to reheat and serve. This is why I save and chill the sauce. Now that you’ve chilled the sauce, that fats have collected and solidified on the surface. Using a shallow spoon, scrape off the fat and spread it over the sliced brisket. It’s just like the trick of using a butter patty on a hamburger or a steak. Except these fats are incredibly flavorful. Lastly, pour the remaining sauce over the meat. You are now ready to cover the dish with foil and reheat your brisket at 325 for 30 minutes. Once it’s done, you won’t be disappointed.

I realize this sounds like a lot for some. But, if you really think about it, the bulk of your time is spent with the roast cooking in the oven or chilling the fridge. You’re work is really quite minimal, there are just a lot of steps.

So what do you think? Do you think you can give this a try? I promise, you won’t be disappointed. This Savory Plum Brisket is well worth the time and effort it takes. Let’ be honest, there really isn’t a whole lot of effort…it just takes time. Like all great things.

This year, try your hand at this Savory Plum Brisket. Over the years, I’ve collected some pretty great hacks in how to cook a brisket.

* The % Daily Value tells you how much a nutrient in a serving of food contributes to a daily diet. 2,000 calories a day is used for general nutrition advice.