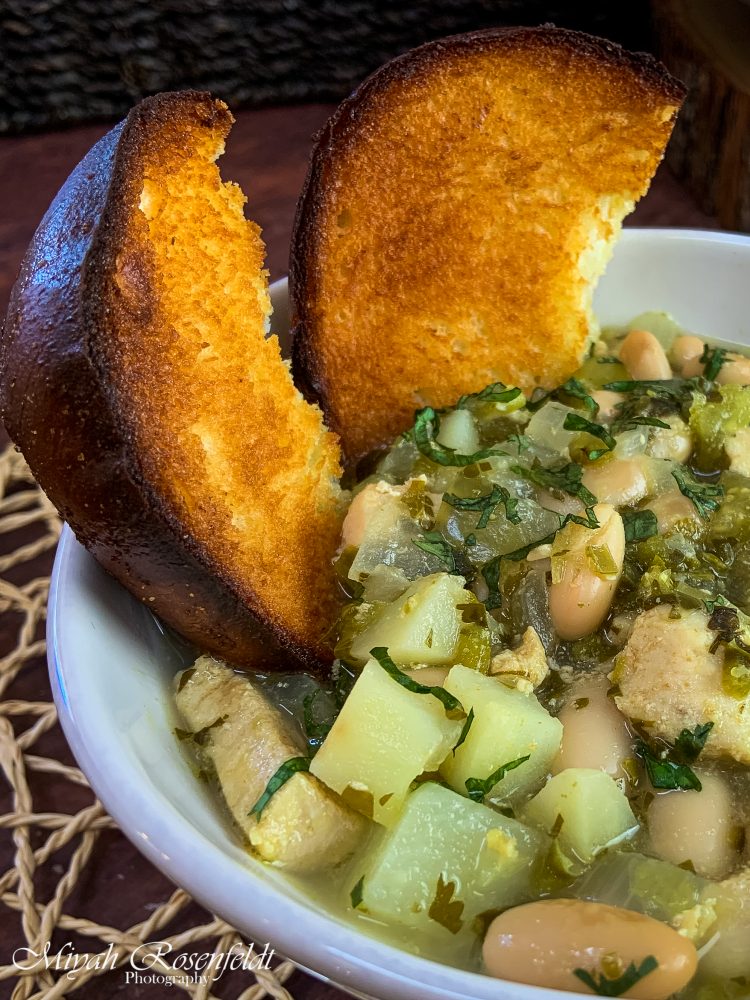 As I’ve mentioned in previous posts, soups are my favorite food. They’re incredible versatile from hearty stews to warm you on a cold winter day to light and refreshing soups on a cool summers even. Because of my fascination with soups, I’ve decided to challenge myself to create soup for every week of the year; 52 Weeks From the Soup Pot. This weeks soup, is an Tomatillo Chicken Chili that I’ve been trying to replicate for years.

2 Once upon a time, there was a bar here in Seattle called the Ramparoom. They had an amazing café next door. Sadly, I don’t recall the name. At that café, they had the most amazing Green Chicken Chili. I get the craziest cravings for that chili. It wasn’t until recently that I was finally able to recreate it. My Tomatillo Chicken Chili is my solute to the Ramparoom. It’s for years, but will forever be a part of the 90’s culture of Seattle.

Roasting your poblano pepper will at a slightly smoky flavor to your chili. To roast your poblano pepper, start by setting your oven to broil. Coat the pepper with a thin layer of olive oil. Now you can set your pepper under the broil. All it to roast and blacken. Once the skins are blackened, you can remove the pepper from the oven to cool. As the pepper cools, it will constrict and pull away from the tough outer skin. This makes is easy to peal away the seared outer layer. Now your peppers are ready to dice for the soup.

To start preparing the actual chili, sauté the onions in olive oil until translucent. Add in the chicken, jalapeño, spices and poblano peppers and simmer until the chicken is fully cook.

As everything finishes up, add in your beans. Give them 5 minutes to simmer. Now it’s time for your final seasoning. Start by adding the juice of one lime. Ultimately, you’ll want between 2 – 4 T. of lime juice. Because your limes will hold varying amounts of juice, you’ll want to alternated adding the remaining lime with 1/2 tsp. salt. Allow your soup to simmer for 5 minutes in between so that the flavors have a chance to combine. Check your flavors before adding more.

Heat your final chili results thoroughly. It’s a little tricky to balance the lime and salt, so give it a few minutes to simmer. Once you have reached the desired balance in your Tomatillo Chicken Chili, stir in your cannellini beans and allow that chili to simmer for a few more minutes. Served it up hot and fresh. I like to serve it with toasted garlic crusty bread. Even with traditional cornbread, this Tomatillo Chicken Chili is outstanding.

My Tomatillo Chicken Chili is my solute to the Rampa Room. It’s long been gone, but will forever be a part of the 90’s culture of Seattle.