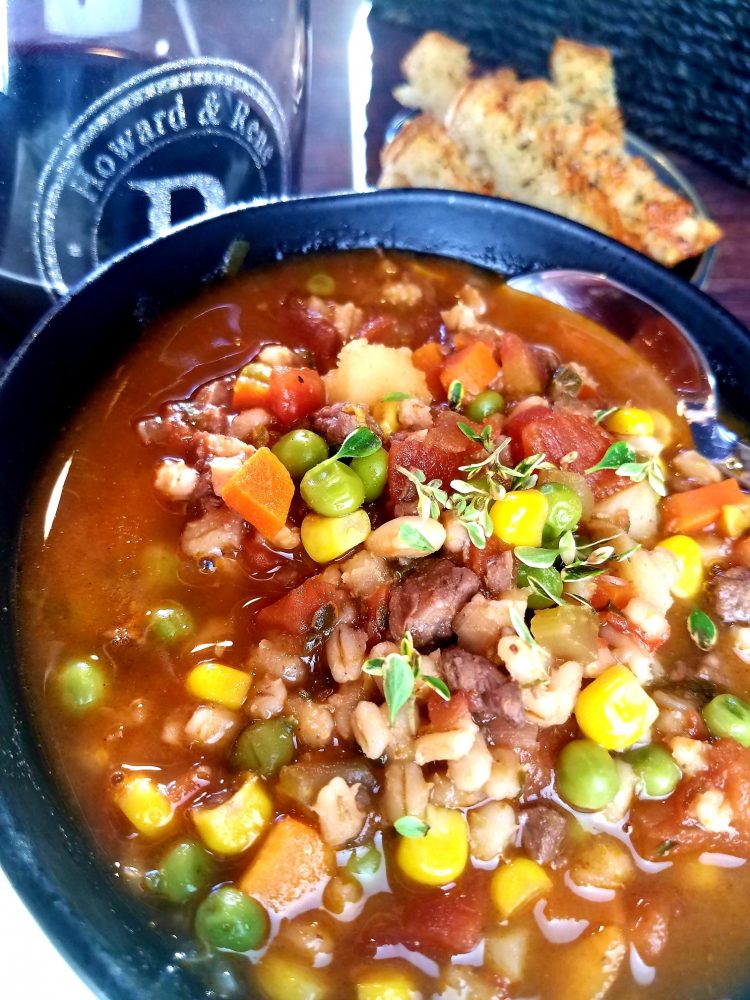 As I’ve mentioned in previous posts, soups are my favorite food. They’re incredible versatile from hearty stews to warm you on a cold winter day to light and refreshing soups on a cool summers even. Because of my fascination with soups, I’ve decided to challenge myself to create soup for every week of the year; 52 Weeks From the Soup Pot. This weeks soup, kicks off the the challenge with an amazing Vegetable Beef Barley Soup.

1 For weeks I’ve had a craving for a rich and savory Vegetable Beef Barley Soup. While the soup takes several hours to prepare, it’s well worth it. It freezes beautifully and stores throughout the week for lunches on the go. It’s iron and protein filled with a substantial amount of fiber to last throughout the afternoon or evening. The barley works as a slow burning carbohydrate the will sustain your energy.

Heat your soup pot over medium high and add the olive oil. Once the oil is heated, add the onions and garlic. Sauté the onions until they are translucent, then sprinkle with salt to sweeten the onions. Stir in the stew meat and continue cooking until the meat is well browned. As the stew meat is browning, finish dicing up the carrots and celery. Stir them into the base once the meat is browned. Allow the mixture to simmer over medium heat for 10 – 15 minutes in order to slightly soften the carrots.

Pour in the beef broth and bring the soup to a hard boil. Once it is at a hard boil, stir in the oregano, thyme, rosemary, bay leaf, diced tomatoes and red wine. Bring the soup back up to a boil before reducing the heat to medium, covering the pot and allowing the soup to simmer for 1 1/2 hours or until the meat is tender.

Once the meat is tender to your liking, stir in the russet potato, sweet potato, barley and spinach. Allow the soup to simmer for 45 minutes or until the barley is tender. Keep an eye on the amount broth. Over the cooking process, the barley will absorb a substantial amount and some will evaporate off. If you find the broth is too low, simply add a cup or two of water. Stir the soup periodically to prevent the barley from sticking the bottom of the pot.

Just before serving, mix in the corn and peas. Allow them to cook for 10 minutes. By adding the corn and peas at the very end, they will retain their firmness and color. It will help to prevent them from over cooking.

This Vegetable Beef Barley Soup is filled with garden fresh vegetables. They create bursts of flavor and color throughout the soup. Serve with a side of garlic herb crostini for dipping. You could even serve this soup with fluffy Cheddar Cheese Biscuits. Either way, your going to want a second bowl full.

This Vegetable Beef Barley Soup is filled with garden fresh vegetables. They create bursts of flavor and color throughout the soup. Serve with a side of garlic herb crostini for dipping. You could even serve this soup with fluffy Cheddar Cheese Biscuits. Either way, your going to want a second bowl full.

* The % Daily Value tells you how much a nutrient in a serving of food contributes to a daily diet. 2,000 calories a day is used for general nutrition advice.